Okay, so now that we all have the same understanding of the Amish belief-system and way of life, let me continue with my story of how my husband’s family left the Amish (What do the Amish believe and why?):

After Brian’s father became “saved” or “born-again” while reading a contemporary Christian book, he and a few of his Amish friends ventured into town and happened upon a tent-revival.  It was there, I believe, that most, if not all of his friends, also accepted Christ as their Savior.  The Bishop, or Amish pastor in their community, did not accept their new ideology, so my father-in-law packed up his family, and, along with a few of the other men and their families, moved to another Amish community, this one in Montana.  This Amish community however, was comprised of “born-again” Amish who readily accepted Brian’s family and their fellow Amish brethren.  A few year later, sometime after Brian’s sixth birthday, his parents knew there had to be more – there seemed to be more ways they could help people if they were not Amish.  This was a huge and risky decision.  But they stepped out and took the risk anyway.  They decided to leave the Amish church.  This choice typically resulted in being shunned, or cut off from all contact with the Amish – family and friends alike.  They would be treated as outcasts and would no longer be accepted into the family or community.  But the miraculous part was that since that particular community in Montana was comprised of “born-again” Amish, they did not believe that shunning was scriptural or right, so they refused to shun those who left – allowing Brian’s family (and those who decided to leave with them) the freedom to go in the direction which they believed God was instructing them.

Now, nearly seventeen years later, Brian’s family is still in contact with their Amish relatives.  Actually, we have traveled several times to visit them in Indiana, attend a cousin’s wedding, and just spend time with his grandparents.  And… a whole crowd of Amish relatives came to attend our wedding in Gettysburg, Pennsylvania – most hired drivers while some of Brian’s cousins rode bikes (it was about a two or three day trip at nearly six-hundred and seventy miles – in the humid one-hundred degree heat of July!) 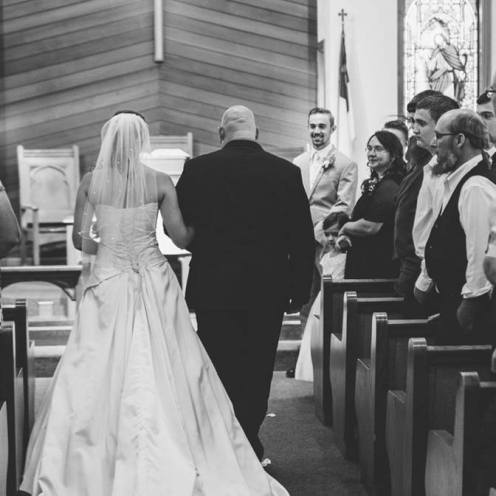 Ever since I was a little English girl, I have been obsessed with the Amish; not only because they had horses and wore pretty dresses (both of which I was fascinated by) but for reasons I could not explain, I have always been so intrigued by their beliefs and lifestyles.  I so desperately wanted to become Amish.  I would go shopping with my dad at an Amish super market so I could watch the horses and buggies in the parking lot and see the pretty Amish girls in their kapps and dresses.  I would giddily eavesdrop on their conversations, even though I could not understand a word of Dutch.  I would read any books about the Amish that I could get my hands on, and would gladly accompany anyone to Lancaster County or Shippensburg, Pennsylvania in hopes of glimpsing some Amish farms.  Once I met Brian however, I understood that my infatuation with the Amish was far more than just a random coincidence – I mean, how ironic that I marry an ex-Amish man, right?  I believe that my desire to know and understand the beliefs and culture of the Amish was a desire God placed in my heart so that I would embrace Brian’s relatives and heritage with open arms.  Sure, there have been some adjustments I have had to make becoming part of a family with a different culture and heritage, but I am so overwhelmingly grateful that I am part of such a perfect family with strong, Christian roots and beliefs.  I have learned so much more about the Amish, especially now that my in-laws share stories, and we have moved to Holmes County, Ohio.  I also have many friends here in Ohio who were Amish as nearly 80-90% of our church congregation is either ex-Amish or ex-Mennonite.  I feel like I am living my childhood dream, especially when driving with the family through Holmes County with my father-in-law at the wheel – I’m not sure why he hasn’t offered his fine services as a professional Amish Country tour guide.

And not only is my head full of knowledge about the Amish, but my house has become quite a collection of Amish “artifacts.”  A hand-made Amish rocking chair sits in my living room (a wedding gift from my precious husband), on a hand-made rug (a wedding gift from his grandmother), his mother’s Sunday bonnet, his jacket from when he was an adorable four-year-old Amish boy, and a dresser my father-in-law made are in the guest room, Amish cookbooks line the shelves in my kitchen, and a hand-made Amish quilt is on a frame in my basement (also made by his grandmother, mother, and sisters as a wedding gift for us).  And even my puppy is the granddaughter of an Amish miniature dachshund.

So what are some of the biggest differences I have noticed as an English girl becoming part of an ex-Amish family?
Well, just to name a few, Brian is the oldest of seven children – I am the oldest of three.  That in itself was an adjustment as there are suddenly twice as many people everywhere all at once.
I was also raised by a dad who appreciated the peace and quiet, so my brothers and I were raised to talk one at a time and always use inside voices.  Brian and his siblings tended to talk all at once and conversations often grew louder and louder until they become shouting matches – being heard was the only objective – usually leaving everyone else with no choice but to hear…although it is all in good fun, I must admit to covering my ears on occasion and feeling quite overwhelmed.  But they have quieted down and I am more accustomed to the energy and busyness, so I’m no longer as uptight.
I was raised where mealtimes were a time of conversation and reconnection as everyone shared news or exciting stories about their day – with plenty of food, dinner usually lasted about twenty to thirty minutes.  But meals with Brian’s family still leave my head spinning at times – but I am learning fast.  I cannot get used to how much food ten people eat, nor how fast it can be eaten.  No matter how much casserole or soup is in the pot, it never looks like enough.  I have discovered that instead of taking a small first helping to ensure there’s enough for everyone, just go for whatever you want as there will never be seconds available.  You snooze, you lose!  I learned this lesson well as I often went to bed with a hungry tummy.  It is more like “survival of the fittest” when it comes to dinner with his family – take what you need – the others can fend for themselves.  This method is incredibly accurate; when followed accordingly, everyone gets their fill.  It is usually a loud, mad rush to serve food, and then I spend more time passing items up and down the table than I do eating.  I have five bites down my throat when the others begin pushing back their chairs and clearing off dishes five minutes later.  It never fails that I still have a whole plate-full left.  Then they ask me if I’m done and want to take my plate … I may or may not have poked my brother-in-law with my fork, telling him to back off slowly because I worked hard to earn this food and I refuse to give it away so easily.
My mother-in-law is the sweetest person you will ever meet; gentle, laid back and very soft-spoken – so soft-spoken, in fact, that sometimes I don’t catch everything she says … I occasionally struggle with understanding people when they mutter, but sometimes, she mutters under her breath or thinks aloud in Dutch.  I often pause and try to figure out if I simply did not understand her quiet voice or if her Dutch was the reason I did not catch it.  The family often speaks Dutch around the house and Brian uses Dutch-German words casually in conversation with me.  I think my Dutch vocabulary has exceeded six words!  I really intend to work more on that.
Amish food is some of the richest, most delicious food, and I have learned to cook some; fried chicken, being one of my favorites.
I have also practiced and perfected my sewing – mostly because I couldn’t believe my seven-year-old sister-in-law could sew better than me – and because Brian is always giving me practice since he often rips his clothing at work.

I have also learned to quilt!  (Isn’t it goreous?) The ladies were unable to have the entire quilt finished in time for our wedding and are putting the finishing touches on now.  A few weeks ago, my mother-in-law taught me how to quilt a pattern on a blanket – it is officially one of my favorite hobbies now.
I also really appreciate the Amish’ selflessness and willingness to help; I think that often the English see things are being fair or unfair – to the Amish, I doubt fair is a word in their vocabulary.  They go far out of their way to help someone in need, whether they will be repaid or not.  My in-laws represent this quality so well, and I see it very clearly mirrored in my husband.  This is an area I, personally, need to grow in.
The solid work ethic, and honest integrity, of the Amish are something else I greatly respect.  They will work as long and as hard as they must to get the job done.  Quitting is not an option.  And deception or dishonesty in any form, is not okay.  I see this too, in my husband and his parents.

I am so blessed to be part of such an incredible family and heritage and there will always be honorable lessons I hope to gain from them and their culture.

View all posts by rachelhelmuth